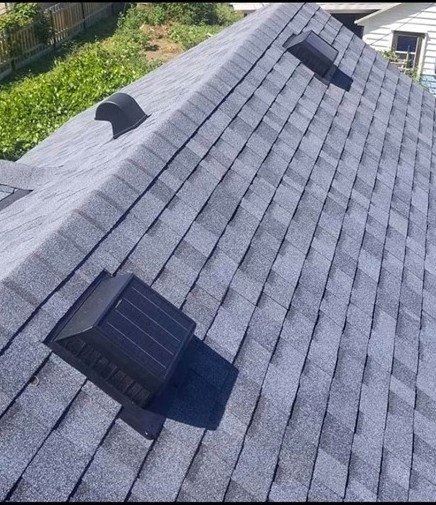 What are passive roof vents?

Passive roof vents are the most common roof vents on the market, chances are your roof has them installed right now. Passive vents work without the use of motorized fans or turbines, they rely only on passive airflow to ventilate a roof’s attic space. The most popular types of passive vents are box vents, and ridge vents while many older homes have gable vents.

The amount of air flowing through your attic depends on attic temperature, ambient temperature, the moisture content of the air, wind velocity, roof pitch and even the height of your roof. During some windless days it is even possible to have close to no airflow at all.

Most local and state building codes require a minimum of 1 foot of passive ventilation for every 300 square feet of attic floor space.

What are active roof vents?

Active roof vents use a motor, fan blade or turbine to exhaust air from the attic. These type of vents are measured for the amount of Cubic Feet of air they move per Minute (CFM). The most common types of active vents include wind turbines, wire powered vents and solar powered vents.

Active roof vents will exchange the air inside the attic with fresh air from the outside many times faster than passive vents. This is because active airflow is more consistent than passive airflow.

Situations where passive ventilation may not be enough

Not enough space on your roof for many vents
Every home has its own unique roof shape and some are not easy to ventilate properly. An example of this is a “Hip Roof” which has a large attic space, very short ridge line and not much space for box vents.

Complex Roof Structure
Some roofs have complex shapes with many cavities, corners and spaces which are more difficult to ventilate accumulate heat and moisture, despite having the minimum amount of passive vents required by building code.

Low Pitched Roofs
A roof’s pitch is a ratio of its rise and run. A 6:12 pitch would mean any section of the roof would be feet in high and run 12 feet horizontally.

Roofs with slopes lower than 3:12 are at a higher risk of having poor airflow through the attic. The chimney effect relies very much on height of the attic to provide adequate passive airflow. Because of this, building codes often recommend double the amount of vents for low slope buildings (1 square foot of ventilation for every 150 square feet of attic space) for roofs with less than a 2:12 pitch

Increasing the airflow in your attic using solar powered vents

Canada Go Green solar powered vents are active during the day and passive at night. When the sun is beating down on the roof creating heat buildup during summer and winter, solar powered vents are working the hardest, moving up to 400 CFM each, increasing the amount of airflow through your attic. The CFM level will drop slightly during cloudy or overcast days when there is less need for high levels of air movement. At night, the vents continue to as traditional passive vents.